As a result of past industrial usage, there are a number of waste management areas, as well as areas of impacted soil and groundwater at the site. Over the past three decades, New Jersey Department of Environmental Protection (NJDEP) and the U.S. Environmental Protection Agency (USEPA) issued multiple Administrative Consent Orders (ACOs) and Records of Decision (RODs) for the investigation and remediation of the site.  While significant progress has been made, investigations, engineering, design and active remediation are ongoing at the site.

Information regarding ongoing site operations and monitoring can be found here and on the Ongoing Efforts page.

WH is working under a Consent Decree with USEPA to remediate site soils, site groundwater, and a majority of the remaining impoundments, jointly designated as Operable Unit 4 (OU4). The full remedy is described in a ROD issued by USEPA on September 27, 2012.   The WH team has invested significant resources in the engineering and design of this remediation program. Construction of the groundwater control, extraction, treatment, and reinjection system is complete and the system is fully operational. To learn more about the site-wide remedy and its status, visit the Site-wide Remedy page.

On September 25, 2018, USEPA issued a ROD for Operable Unit 8 (OU8), commonly referred to as Impoundments 1 and 2. The final remedy is based upon a comprehensive Focused Feasibility Study (FFS), completed by WH, which included an extensive evaluation of available environmental cleanup technologies. A detailed description of EPA’s selected remedy can be found on the OU8 page.

Over the past three decades, a number of significant measures have been taken to remediate portions of the site and protect human health and the environment. The following is a summary of accomplishments at the site, including efforts completed prior to Pfizer’s involvement.

USEPA inspects Superfund sites every five years to ensure that completed cleanups remain fully protective of human health and the environment.  The most recent (Fifth) American Cyanamid Superfund Site Five-Year Review was completed September 11, 2019 and is available on USEPA’s website (https://semspub.epa.gov/work/02/568928.pdf) or can be viewed here. 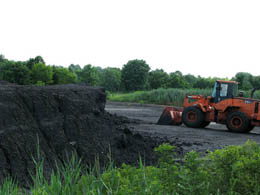 Over 147,000 tons of iron oxide was transported off-site by rail for recycling.

Over 147,000 tons of iron oxide was transported off-site by rail for recycling.